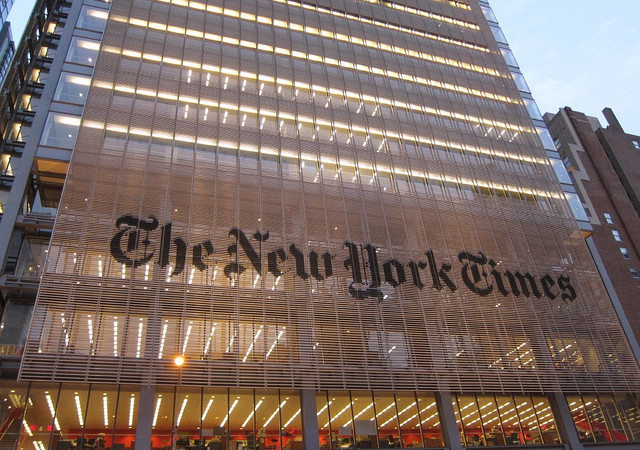 At a full staff meeting yesterday, The New York Times publisher Phil T. Ochs, Jr. announced that “a new era is dawning at The Times, an era of unbiased reporting on Palestine and Israel,” adding that a search for his successor had begun. A former editor of The Times and a close family friend both speculate that the most likely successor is his son, Phil T. Ochs III, a 2002 graduate of Brown University, who has encouraged this new direction. The young Ochs spent his junior year in Ramallah and traveled throughout the area.  In the interim period, the current publisher and his editorial staff will oversee a number of major transitions.  Two new appointments have already been announced.

“In keeping with our new policy,” he said, “Glenn Greenwald, independent investigative reporter and co-founder of The Intercept, will assume the position of senior national security reporter.” Ochs also announced that Laura Poitras, a colleague of Greenwald’s, co-founder of The Intercept and a documentary filmmaker, has accepted the newly created position of national security consultant.  According to anonymous sources at The Times, both have signed ten-year contracts.

Glenn Greenwald is a Pulitzer Prize-winning journalist, author, and constitutional lawyer.  Along with Laura Poitras and Jeremy Scahill, he is also a founding editor of The Intercept, the online publication “dedicated to producing fearless, adversarial journalism.” Founded in 2014, in the wake of Edward Snowden’s National Security Administration (N.S.A.) disclosures, its initial purpose was to serve as a platform for these disclosures.  He is well known for his series in The Guardian detailing American and British global surveillance programs, based on classified documents disclosed by Edward Snowden. Greenwald admits that at first he thought The Times’ offer was “some kind of weird prank.”

Laura Poitras, a recipient of the MacArthur “genius” Fellowship (2012), the Pulitzer Prize (2013), and the Academy Award for her 2014 documentary “Citizenfour,” about the days and weeks following the Snowden disclosures, will be working remotely from her home in Berlin, because it would be “unwise,” she said, for her to move to New York at this time.

On hearing about the appointments of Greenwald and Poitras, Edward Snowden promised to release a new cache of classified information. From his suite at the Ecuadorian Embassy in London, Julian Assange sent an encrypted message of congratulations, which Laura Poitras has promised to decrypt.