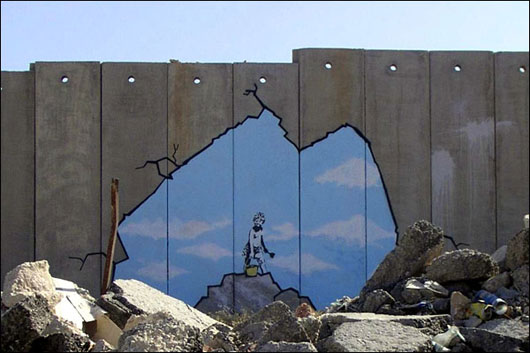 QALQILYA, West Bank — In the West Bank town of Qalqilya, a cheering crowd of Palestinians gathered today to witness a bulldozer breaking off the final piece of the wall separating Israel from the West Bank. Its new owner, the Solomon R. Guggenheim Museum in New York City, will take possession of it immediately.

In a campaign that started three years ago, famed graffiti artist Banksy systematically covered the wall with his iconic images in order to lure collectors to achieve what years of protests and lawsuits could not. A fierce bidding war ensued, with images fetching prices ranging from $10,000 to $1.9 million. The separation wall has since been broken apart and distributed to galleries, museums, and investors around the world.

Critics have long held that the wall both symbolizes and physically enforces an Israeli regime of apartheid. This historic art project, they contend, has dealt a mortal blow to Israel’s campaign to unilaterally redraw its borders, expand its control over precious water resources, and destroy the Palestinian economy.

Though its path deep inside the occupied West Bank violates the Geneva Convention’s rules governing occupation, the wall has proven to be immune to all manner of legal and civil interventions. These have included rulings from Israeli and international courts and an ongoing campaign of non-violent protest that has seen thousands of arrests, injuries and deaths of unarmed Palestinians.

Banksy instead leveraged the power of capital to break through the illegal obstruction. He insisted the profits be distributed to Palestinian villages and the some 57,000 families whose land had been forcibly confiscated to build the wall, or whose livelihood had been destroyed by it. Israeli government officials uncharacteristically declined comment. Israel’s plan to expand its territory deep into the Occupied West Bank through its separation wall was dealt a mortal blow through the power of art.